Broken Promises to Our Children:
A State-by-State Look at the 1998
State Tobacco Settlement 18 Years Later
December 14, 2016

Since the states settled their lawsuits against the major tobacco companies in 1998, our annual reports have assessed whether the states are keeping their promise to use a significant portion of their settlement funds – estimated at $246 billion over the first 25 years – to attack the enormous public health problems caused by tobacco use in the United States. 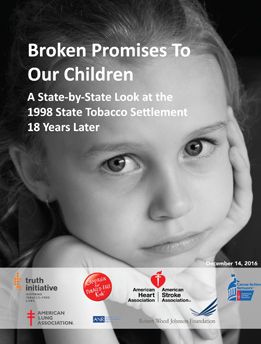 Despite receiving huge sums from the tobacco settlement and collecting billions more in tobacco taxes, the states continue to shortchange tobacco prevention and cessation programs that are proven to save lives and money.

In the current budget year, Fiscal Year 2017, the states will collect $26.6 billion from the settlement and taxes. But they will spend only 1.8 percent of it – $491.6 million – on programs to prevent kids from smoking and help smokers quit. The states are spending less than two cents of every dollar collected in tobacco revenue to fight tobacco use.

This huge gap is undermining efforts to save lives and health care dollars by reducing tobacco use, the leading preventable cause of death in the United States.